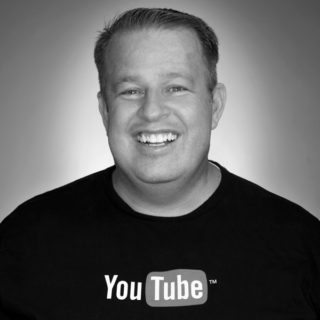 Derral is the CEO of Creatus, a video marketing and strategy company, as well the Founder of VidSummit, an annual event in Los Angeles for video creators and marketers. He has helped 24 YouTube channels go from zero to more than a million subscribers, and he has generated 54 billion views on YouTube.

Derral is the Founder and Executive Producer of The Chosen, the highest grossing crowdfunded movie project of all time. He was also Executive Producer on several viral video campaigns, including Squatty Potty’s ice cream pooping unicorn ad. He works with some of the biggest YouTube creators in the world, including Mr. Beast, who has 42 million subscribers and one of the fastest growing channels on YouTube.

Derral has been featured on The Today Show, Good Morning America, NBC, ABC, CBS, FOX, ESPN, FORBES, World Religion News, and more. He was featured on the Forbes list “20 Must Watch YouTube Channels That Will Change Your Business, “alongside Tony Robbins, Marie Forleo, and Gary Vaynerchuk.
Derral’s career passion and personal mission is to help individuals, brands, and businesses make a positive impact in the world, but his greatest passion is his family: his wife, Carolyn, and their five amazing children, Ellie, Logan, Kelton, Thatcher, and Bridger.

Attribution has been top-of-mind for advertisers during the last few years. And while we all agree that a Last Click model simply doesn’t deliver on the promise, why is it still the most used model? Trusting Machine Learning has been hard for many organizations, especially those without exabytes of data.

Mariia will provide an attribution refresher and then reveal how Machine Learning algorithms can help you grow your business with proven multi-touch attribution. All it takes is a willingness to take on a new technology and some traditional change management.